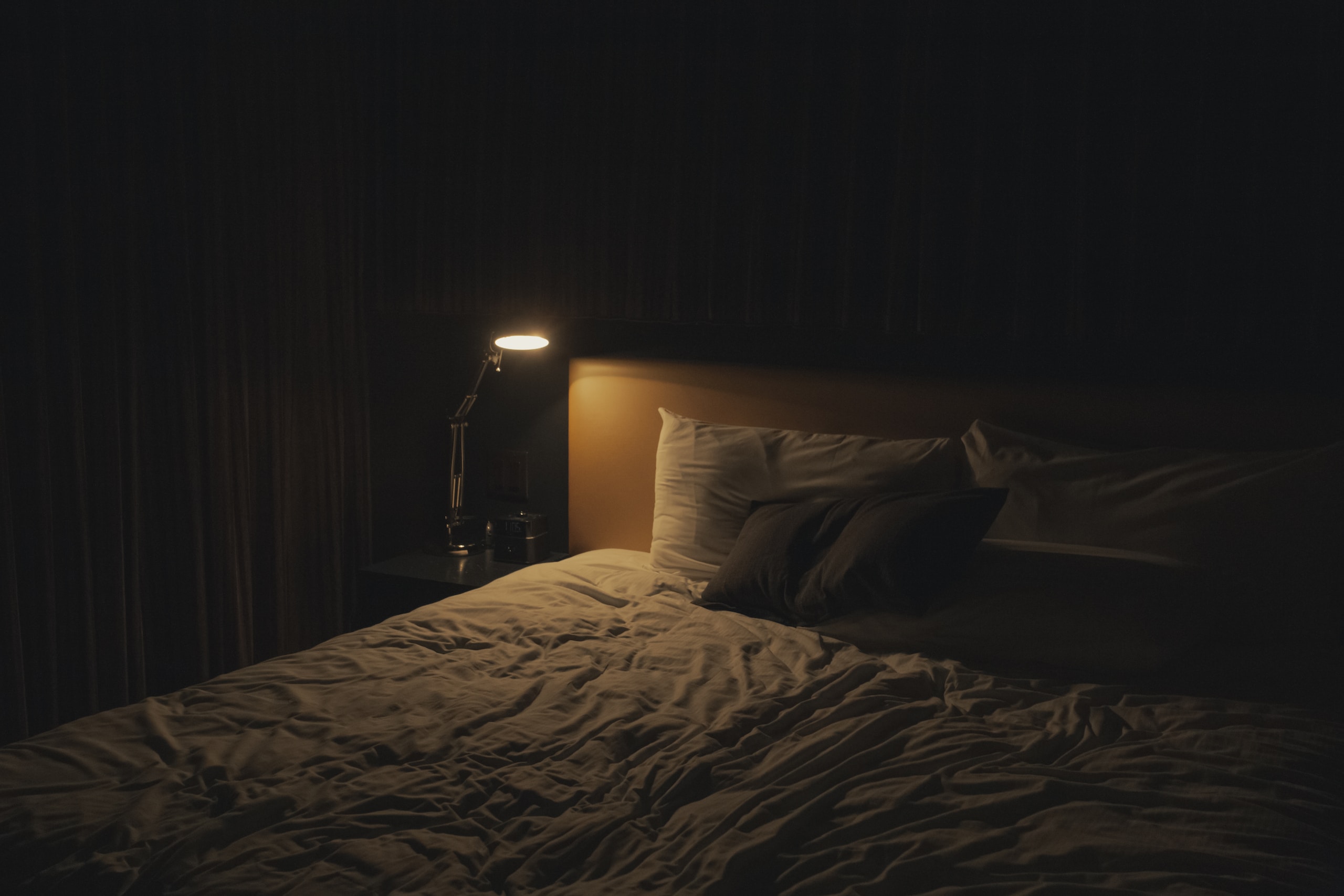 “Excuse me. Sir?” The voice woke Wade up from a peaceful sleep. He reached over to the lamp and turned it on.

“What is it?” Wade rubbed his eyes and tried to make sense of what had just appeared in his bedroom.

“I need some help,” the blurry thing said.

There is a point where anything, no matter how odd, can be normalized by a human mind. Wade was getting close, but this visitor was pushing the limits of the sort of odd he could accept. “What is it you need?”

“I need you to do something for me.” The creature stood in front of Wade pleading, which was specifically odd for one so powerful looking.

“What is it? Tell me. I’m happy to help, but I really have to rest. I have a test in the morning.”

“I need to apologize. I’ve done something terrible and I need to tell her I’m sorry. Can you please help?” The scars stretched across the beast’s face and his mouth opened into a tortured smile, bearing crooked and rotting teeth and several fangs.

Wade knew this one really needed him. “Look, I’ll do what I can,” Wade replied. “Let’s start at the beginning, okay?”

“Of course. Where are my manners? My name is Thomas Babcock.”

“It’s nice to meet you, Thomas.” Wade was getting good at lying about these sorts of things. He reached for his glasses on the bed-side table, though he was certain he didn’t want to see the creature any more accurately than he already could. He settled the glasses on his face. “Well, Thomas isn’t a name I usually associate with someone as… large as you.” Wade looked the creature up and down, taking note of the ant-like shape, the oozing, bloodshot eyes and the open wounds that appeared to be leaking fluids he assumed were blood on his carpet.

“What I mean is… oh nevermind. Tell me exactly what do you think I can do for you.” Wade sat himself up and propped his head up with a spare pillow, taking the time to look away so he wouldn’t make a face at this wretched being.

Thomas explained his predicament and asked again for Wade’s help. Wade agreed to do everything he could in the morning when he got up. There was very little he could do, he explained, in his pajamas in the middle of the night.

Normally, that would be it. Wade would put his glasses away, and the creature would disappear when the light went out. He would roll over and attempt to get back to sleep, that is if the sight of the misshapen monster could be washed from his mind. This was nearly a specialty of Wade’s by that time. He had a series of images that he would see in his mind, effectively scrubbing the night visitor’s face, or mutilated body from his mind. Wade repeated the procedure and nearly fell asleep.

“Thank you, kind sir,” Thomas said. “If it’s alright with you, I’d like to wait. I am not ready to… go back yet.” Wade turned his head to look, and could still see Thomas standing awkwardly in the center of his room waiting like a dog who needed to go out to pee. Wade saw him look around in the moonlight as if he were being followed.

“Um.” Wade gingerly stepped into this unfamiliar territory. “If that makes you giggle. I’m going to try and get some rest before the alarm goes off.”

“Delightful room you have here.”

“Thanks.” Wade pulled his covers up to his shoulders so he could watch Thomas without him knowing it. “Now, if you don’t mind, I need to lose consciousness for the next two and a half hours.”

“Of course. Ignore me.” Thomas mostly closed his deformed eyes and sat back on his rear haunches.

The alarm on his phone was blazing in Wade’s face, literally. Thomas was holding it up to his head.

“Give me that!” Wade snatched the phone out of the air in front of his face. He didn’t much appreciate anything shoved at him. This was especially true of gruesome giant bugs pressing screaming phones in it.

“I beg your pardon. It was making such a noise and I couldn’t sort out how to stop it. It is quite annoying, isn’t it?” Thomas sat back again, and again smiled a gruesome smile. It was even worse in the daylight. Wade was getting concerned about Thomas Babcock, the beast that he had until that moment presumed was yet another night vision, or bad dream. Creatures in dreams weren’t very good at holding actual things–like phones. At least that had been Wade’s experience until that moment.

“What are you still doing here?” Wade was groggy and upset that a visitor to a dream was handing his phone to him, though he tried to hide it.

“As you likely recall, I’m waiting for you to help me with an issue. I desperately want to avoid having to… oh, it’s too unspeakable, so I won’t speak it. I really must simply apologize.” Thomas sat back again with a horrific frown. In the light of day, his face looked vaguely more human than in the dark, which made it more disturbing somehow. Wade decided in that moment to take it as fact that this wasn’t a dream at all.

“Fine. Fine. You still haven’t told me what you need me to do.” Wade swiveled and dropped his feet to the floor. Thomas looked away while Wade dressed. This beast is really polite. How is he even here?

“I need you to tell my family–my wife–that I’m sorry. That’s the only way out for me. I must apologize — you must do it for me. I’ve tried on my own and it isn’t working.”

“What?” Wade stopped buckling his belt. “Sorry for what?”

The creature looked sad. “Just tell her—my wife—that it was an accident.”

“Yes. What is her phone number?” Wade desperately wanted to make this end and get on with his day.

“Oh right. Yes. How silly of me. Our number is Pennsylvania 5–3249.” He sat up like he would stand and then sat back down, fidgeting.

“I’m sorry. Did you say ‘Pennsylvania?’” Wade sat down on his bed, shoes and socks ready to pull on.

“Yes. Pennsylvania 5–3249. Thank you so much for doing this. We live in Pittsburgh.” He made a pained expression that Wade felt Thomas meant as gratitude.

Wade pulled up his phone browser and searched for the number. The most promising explanation he could find was a Wikipedia entry explaining that before area codes existed, phone numbers were only a few digits and they repeated in each state and then each city. This number was from Pennsylvania, but it must be very old.

Wade looked up at Thomas. “Well then, let’s make that call.” He mimed the tapping of numbers on his phone and held it to his face.

“What sort of thing is that you’re calling on?” Thomas sat forward, interested.

“Oh yes. It’s an experimental wireless. It’s like a radio that… oh it doesn’t matter.”

Wade continued talking to his phone. “Yes — Hello. My name is wade. I have a message from Thomas. Thomas Babcock said that he was sorry — is sorry.”

He nodded at Thomas and covered the front of the phone as if it was an old wired phone mouthpiece.

“What is her name?” Wade whispered and smiled at the gigantic, overly polite and genteel, six-legged beast.

“Marabelle.” Thomas was leaning forward. “Thank you for helping me. You are a wonderful helper.”

“Is this Marabelle?” Wade spoke into his phone again. “Yes. You see, he said he is very sorry — that it was all his fault.” Wade was getting into the act, so he stood and began walking in a tight circle. “I’m sure he would tell you himself, but he’s… unable to at the moment. He is really very sorry.”

Wade finished his turn to find the room empty. He slid his phone in his pocket, grabbed his shoes and socks and headed for the door, careful to step over the slimy looking puddle on the carpet.