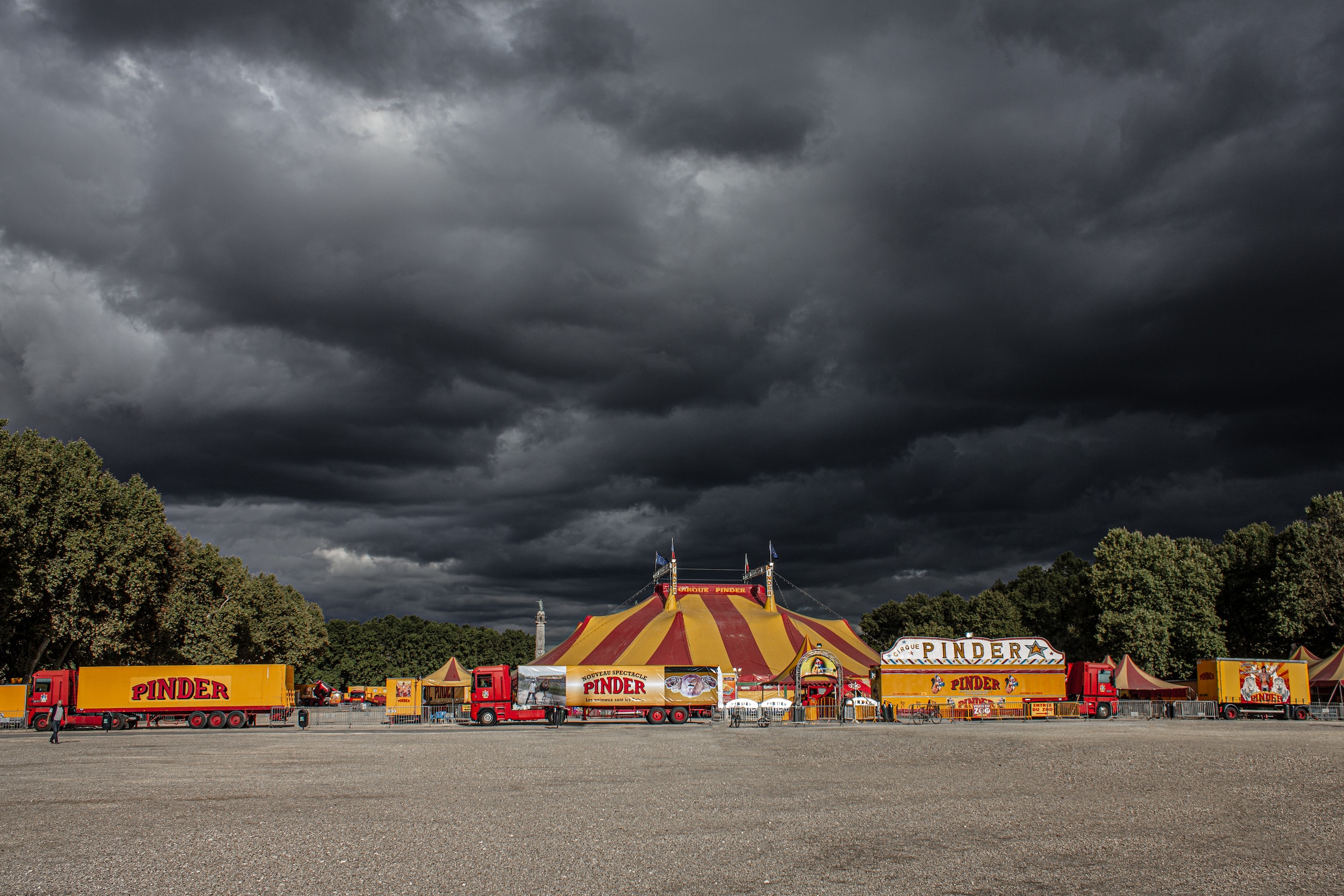 Every night after the show Bizarro stood in the wings watching the crowd leave. That night was the same. It was a packed house. Every bench was full. Dozens stood in aisles to watch. Bizarro had never been better. He was at his peak, and that night was his best performance. He stood in a deep shadow watching kids waving their arms, tossing popcorn out of their bags and retelling the wonders of the night to their parents. The parents took glee in the excitement on their children’s faces. Young couples left holding hands and laughing. Old couples did too.

That night one small boy had stared at him all night. Bizarro would never forget the smile on that eight-year-old boy shining through the scar on his lip left from a cleft palate repair. Eventually, the stragglers left, slowly meandering out of the enormous tent. The last to leave was that boy. Bizarro saw him dragging his feet, his father dragging him away and out the door. Bizarro did something he had never ever done. He stepped out of his shadow, and gave a little nod and salute to the boy. Then he stood at attention, smoothed down his red waistcoat, straightened his black top-hat and tugged at the lapels. The pull made the gold epaulets and cords on his coat sparkle and swing. He winked at the boy, who straightened up and walked agreeably out holding his father’s hand.

“These are my people, dad.”

“Okay, Ash. Let’s get you in bed. Maybe you can come back tomorrow.”

Then the only thing left was the smell of manure, smoke, popcorn and cotton candy. Occasionally a cross breeze would carry the smells of gyros and hotdogs from the carnival booths outside. That’s the smell of home to a carnie. It’s similar to the feeling of home a New Yorker gets — one who remembers it from the old days — when they get a waft of street meat, piled up garbage, humid salty air and unwashed homeless people.

Eventually the tent was quiet. Bizarro figured he hadn’t moved a muscle in nearly an hour. He wasn’t ready to. Not yet. Half the lights cut out, deepening the shadows. Bizarro took out a cigar and rolled it around in his fingers gently before cutting off the tip. He extracted an antique floral-embossed flip-top lighter from a hidden pocket in his waistcoat. After rolling that around in his other hand a minute, he tugged on the cover, it flipped open and a flame burst out all in a split second, piercing the shadow he had owned since the flood lights went out. As he pulled the first breaths quickly through the cigar the light dimmed and flared illuminating his aging and gnarled face.

“Carl.” The voice came out of the darkness. “A drink?” Bizarro took a long drag from the cigar.

Bizarro’s response sounded more like the deep growl of a monster than the words of a human.

He turned away from the view of the open door of the tent and walked slowly back into the bowels under the north bleachers. A small group of performers sat in a broken, bent circle on wooden boxes and folding chairs. Everything and everyone was an antique. They all wore forlorn expressions on grizzled faces covered in deep coats of makeup. Their appearance was otherwise fit and strong. The three trapeze artists were from the Moscow Circus originally and their bodies were as tight and muscular as they had ever been. Each one held a different shot glass full of vodka imprinted with a different view of St. Petersburg.

Angelo, the Strong Man had the shoulder straps of his singlet pulled down to his waist. Every muscle was cut as if by Leonardo himself. The Rubber Man named Theodore sat with his feet twisted into a pretzel on a cushion on a box.

Boris, the catcher, broke the silence. “Za ná-shoo dróo-zhboo!” He raised his shot high above his head, lowered it and drank without waiting for anyone to catch up. A chorus of agreement broke out.

Each downed their drink and waited silently for the words of their leader and a refill from. Bizarro wasn’t ready. He had never been able to make himself ready for big moments. He just did them like he was always prepared.

“My friends.” He cleared his throat. The deep growl lilted into a musical-sounding Scottish voice. “All these many years we have been at each others’ sides. We have watched more than a few young bucks and pretty dames come and go. It is the six of us that have endured. Only us. We have outlasted them all. We have outlasted our own selves.” He paused and took a couple of short quick breaths.

“We have outstayed our welcome. Tonight you were brilliant. You achieved new heights, and in the faces I saw leaving here tonight… you are truly immortal.” He looked around the faces that surrounded him. They smiled through the wrinkles and the makeup. “It has been my honor to perform with you for so so many years.”

He tilted his head, raised his glass and toasted, “Beannachd leibh.”

The first summer rays peaked over the hills on the east side of town and sparkled off the chrome spokes of Ashton’s bike. He was leading a pack of boys up the hill to see the carnival one more time before they packed up. They rounded the bend on the dirt road leading to the big top and the grassy field spread out before them. His eyes tracked up to where the tent stood and he stopped pedaling.

Ash sat down on his seat and coasted to a stop, unable to believe what he was seeing. His friends arrived seconds behind and were unable to understand it. Ash had told them about the performers, the fire jugglers and the man who shot out of a cannon, but there was no sign of any of that. Instead, there was a rotting shell of a tent, full of holes flapping in the early morning breeze. Parts were collapsed, and the midway was a street full of decay, and it smelled of rotting food. The boys walked together through the ghost town that was once a circus. They couldn’t deny that.

Ash pulled out his ticket stub to prove that it was last night he had seen it. There, printed clearly on new cardstock was the fresh gold foil outline of the tent, now crumbling in front of them. There was last night’s show time. Nobody could call Ash a liar. They walked for a half hour through the dusty, moldy mess and suddenly Ash had a thought. He dropped his bike and ran around to the main entrance, sized it up, and walked in. The boy fearlessly walked to where he had seen the circus man salute him the night before. There was nothing.

He continued under the bleachers, stepping over rotting planks that had fallen until he reached a small ring of crumbling boxes and chairs. In front of him, laid neatly on a box, looking brand new was the waistcoat and hat. He pulled the hat on, and straightened it out. He couldn’t stop himself from giving the nod, the salute and a wink.